Gilitte Pik Chi Leung (b. 1980, Hong Kong) first established herself in artistic circles as a musician. In 2005 she shot the medium-length film, Groundwalk, which screened at gay and lesbian festivals in Paris, Tokyo, Berlin, and Seoul. After the two shorts I Want to Make a Movie (2009) and Nameless (2011), she shot her feature debut Love Me Not. In addition to direction, she also writes, edits, and composes the music for her films. 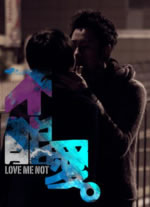 Love Me Not di Gilitte Leung