Ella Lemhagen, born 1965, has studied film history at The University of Stockholm and directing at The Swedish National Film School. In 1986 Lemhagen was commissioned by Sveriges Television (The National Swedish Broadcaster) to direct a short film based on her own script. She has also studied in Paris for one term at a film school that specializes in documentaries.

In 1992, Lemhagen was selected to represent Swedish young talent at the World Fair in Seville, and in 1994 “The 13th Anniversary”, a film directed and written by Lemhagen, premiered at the Gothenburg Film Festival: The film won the Audience Prize for Best Short Film.

“Tsatsiki, Mum and the Policeman” was Lemhagen’s third feature film and became a great success, both nationally and internationally. The film was awarded at many film festivals. In 2003 Lemhagen directed “Immediate Boarding” produced by Filmlance/Charlotta Denward & Tomas Michaelsson.

After finishing “Immediate Boarding”, Ella started writing “Patrik, Age 1.5” (Patrik 1,5) which will have its national premiere during the fall of 2008. 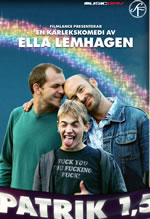