ELDAR RAPAPORT is the 2009 winner of the European Iris Prize, the most prestigious Award for International Gay and Lesbian Short Films, for his acclaimed short film ‘Steam’. Born in Tel Aviv, Israel, he moved to the US in 1991 to attend Emerson College in Boston. In 1997 he joined the new media world, producing websites, DVDs and other multimedia projects for a variety of worldwide clientele. In the Spring of 2001 he started Film Production studies at NYU, and a year later he wrote and directed the short film “Tremor,” a short film about a hustler juggling a double life. “Tremor” premiered in New York at the 2003 NewFest Film Festival, and went on to screen internationally, including festivals is Spain and Australia. “Postmortem,” his second short film, and the basis for “August”, premiered in 2005 and screened in over two dozen festivals around the world, including Sydney, London, New York’s NewFest, Seattle International Film Festival, Outfest in Los Angeles, and the Palm Springs Short Films Festival. It received the Audience Award for Best Short Film in Barcelona GLFF. It was picked up for DVD distribution by Picture This! Entertainment and aired on MTV/Logo cable channel in the spring of 2008. His recent short film, “Steam” – about two men stuck in a steam room with no exit – is still going strong on the festival circuit, picking up the prestigious 2009 Iris Prize in Cardiff, UK and the Jury Award at LesGaiCineMad in Madrid, and is available on the 2010 best-selling DVD shorts compilation ‘Best Gay Shorts’ from TLA Releasing. Eldar will return to the UK in the fall of 2011 to shoot a short film with his Iris Prize grant of £25,000. He currently divides his time between Los Angeles and Tel Aviv, Israel. “August” is his feature film directorial debut. 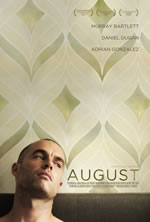