Oliver Hermanus is a young, 27-year-old film director who has worked as a press photographer before studying Visual Arts in Cape Town and in California, then in the London Film School. His first feature film, which was shot in South Africa and is titled Shirley Adams, was released in 2009. The movie told the story of a mother who has to face living with her son being a tetraplegic due to a bad bullet injury. With Skoonheid Hermanus plunges us in the story of two men whose life will be changed for ever by the shady relationship they have together. 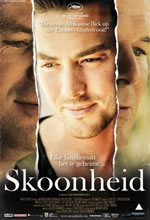