Liz Rosenfeld is a Berlin-based artist utilizing modes of performance through film and video in order to convey a sense of past and future histories through moving images. Her current work deals primarily with issues of queer identity as represented though revisionist history, cruising, transient bodies, pop culture icons and different kinds of public and private transitional space. Liz’s work is invested in concepts of how we remember our own history, as well as how and where we identify ourselves with/in community. The linage of traditions such as family portraiture, re-enactment, archiving, and communal gatherings, are important themes present throughout her work. She is intent on examining the possibility of more within the multitude, as opposed to a final end, or what could be called the orgasmic moment.

Liz graduated from Hampshire College in 2002 with a BA in New Media with a concentration in video art. In 2005 she received an MFA from the School of The Art Institute of Chicago in the Performance Department, and in 2007 gained an MA in Performance Studies from Tisch School of the Arts at New York University.

Liz’s writing has been published internationally in such books as the anthology ” Nobody Passes,” and she was most recently featured in the German queer art magazine “Hugs and Kisses.” Liz’s film, video and performance work has been shown internationally at venues such as The Kitchen, The Tate Modern, The Hammer Museum, The Impakt Organization, The Victoria & Albert Museum, The Edinburgh Fringe Festival , The British Film Institute,The Hebbel Theater (Berlin), The National Museum for Women in the Arts, Chicago Filmmakers, and many international film festivals. 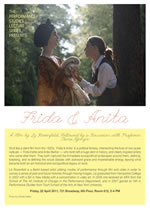