True to the independent filmmaking spirit, Betsy Kalin often wears the hats of producer, writer, director and editor. She received a BA in Women’s Studies from Columbia University and an MFA in Directing from the University of Miami. In 2004, her feature length documentary, Hearts Cracked Open, premiered to great acclaim at the San Francisco International LGBT Film Festival and has gone on to win several awards. Her film, Roof, premiered at New York City’s MoMA as part of New Directors/New Films and is a part of the Short Shorts compilation released by Picture This! Entertainment. She also wrote and directed the lesbian biography series, LesBios, for web broadcast. Last year, she programmed and produced the film component of the ONE Archives’ GenderPlay Exhibition which examines the interplay of gender and identity in the LGBT community. Currently, she is producing and directing the documentary, East L.A. Interchange, as well as producing Before Homosexuals with John Scagliotti, the Emmy award-winning producer of Before Stonewall. Her latest film, Chained!, is screening in festivals across the country. (http://www.lawomenstheatreproject.org/attending-artists) 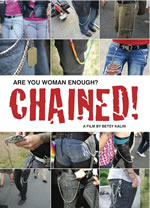